Master’s students from the Blue Carbon Lab are investigating the impacts of tidal restriction and tidal reinstatement on saltmarsh sediments.

Saltmarshes are unique intertidal systems that serve as important habitat for native biodiversity, while also sequestering significant amounts of carbon. Due to their carbon sequestration ability, saltmarshes are vital nature-based assets in the fight against climate change. Unfortunately, much of Australia’s saltmarshes have been significantly degraded due to land reclamation for agriculture, industry and urban development. 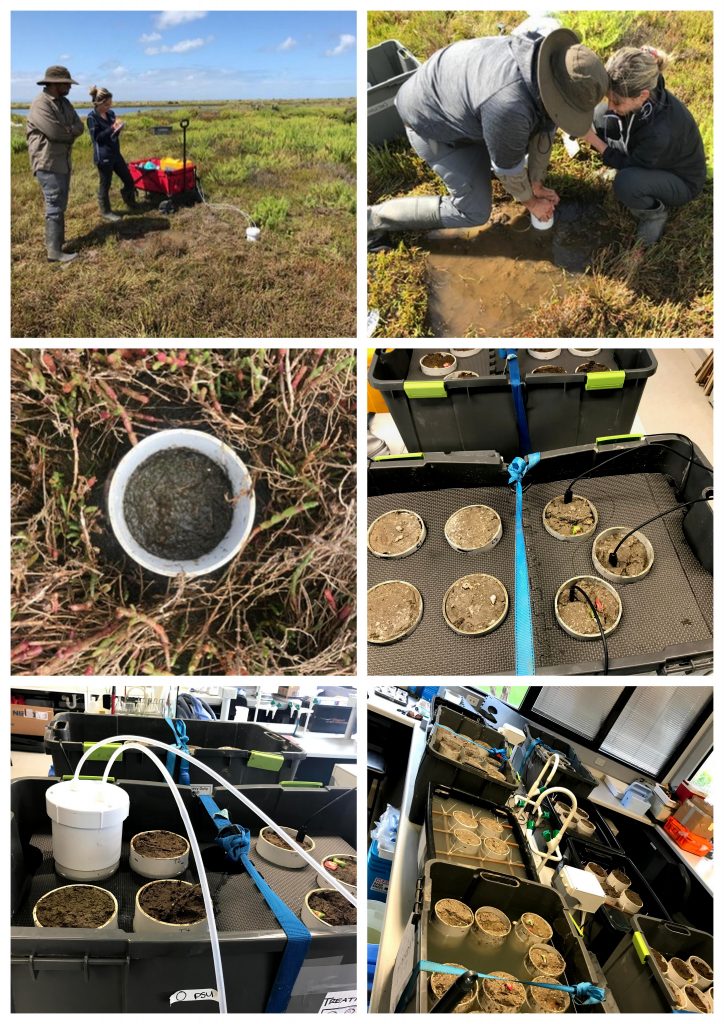 Rebecca is researching how reinstating tidal exchange to a former saltpond at Avalon Coastal Reserve will influence greenhouse gas release and carbon cycling. She is taking hypersaline (94 PSU!!) cores, and flushing them with seawater (34 PSU) to mimic tidal flushing. The data she is collecting will be used to inform the Restoration Action Plan currently being developed by BCL, UNSW Water Research Lab, Parks Victoria, The Nature Conservancy and other project partners, as part of the Victorian Coastal Wetland Restoration Program.

Amanda is investigating the impacts of tidal restriction (simulating bund wall installation) on carbon cycling and greenhouse gas fluxes. She has taken cores from a healthy saltmarsh and slowly diluted them with freshwater to mimic the cutoff of tidal exchange, with increased freshwater run-off into the system. Despite large areas of saltmarsh being converted for other land use purposes since European arrival in Australia, there have been very few studies that have investigated the impacts on carbon and greenhouse gas release.

With the help of volunteers (Eve and Shash), Becca and Amanda spent two days in the field collecting cores and bringing them back to the lab where they incubated them for a 1-week acclimation period, prior to altering the water regime. Once the experiment started, the team collected greenhouse gas flux measurements every 6-hours for the first 4-days and then every 12-hours until day 7. After day 7 measurements were taken every 24 hours. Daily flux measurements were taken until the end of the experiment (30 days). Destructive cores were sampled on days 2, 4, 7, 15, and 30. Samples were taken for microbes, carbon content and decomposition, profiles of pH and redox, and nutrients.

Amanda and Becca are in the final days of wrapping up their experiments in the lab and are expected to deliver their theses by the end of June. Stay tuned for results!