A/Prof Peter Macreadie, head of the Blue Carbon Lab, has been appointed as the interim Chair of the Independent Scientific Advisory Board (ISAB) for the newly funded National Decommissioning Research Initiative (NDRI).

With many of Australia’s offshore oil and gas (O&G) structures reaching the end of their lifespan, it has become a research priority to gauge the best way of decommission obsolete rigs while delivering the best environmental outcome.

Over the next 3 years, NERA will commission, review, and publish, impartial and credible research on the environmental effects of offshore O&G infrastructures. In the future, this information will enable Australia’s government to take evidence-based decisions when evaluating the future of O&G decommissioning on our coasts.

Australia’s NDRI model is based on the INSITE program (INfluence of man-made Structures In The Ecosystem) developed in the North Sea. Launched in 2012, INSITE has recently concluded their initial phase (2015-2017) with funding from BP, Centrica, CNRI, ExxonMobil, Marathon Oil, Shell, Repsol-Sinopec, Total E&P UK (£2.4M over 3 years).

During this period, INSITE has successfully completed eight research projects (involving 17 European institutions) and will deliver more than 30 scientific publications on the impacts of O&G structures in the North Sea. INSITE recently begun an additional 5-year phase where > £6 M will be allocated to furthering their research plan. 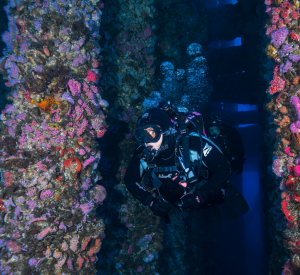