For most people, marine biology conjures up images of dolphins, turtles and coral reefs.

But like many careers, Dr Peter Macreadie’s is far less glamorous than people think.

“I love the smell of mud in the morning,” he told 7.30 as he squelched through swampy salt marshes just outside of Melbourne.

“I love these mangroves, I love the salt marshes.”

“They don’t have the charisma of the Great Barrier Reef. They’re often considered the armpits of the coast, but I think people are just unsure about them.”

He is on a mission to share his love of these so-called “blue carbon” environments, which he believes are crucial in the battle against climate change.

“Blue carbon is carbon [dioxide] that is captured and stored by the oceans,” he said.

“But in the oceans, the heavy lifting is really being done by three ecosystems: you’ve got your seagrass meadows; your salt marshes or tidal marshes; and mangroves,” Dr Macreadie said.

“These ecosystems occupy less than 1 per cent of the sea floor, yet they sequester half the ocean’s carbon.” 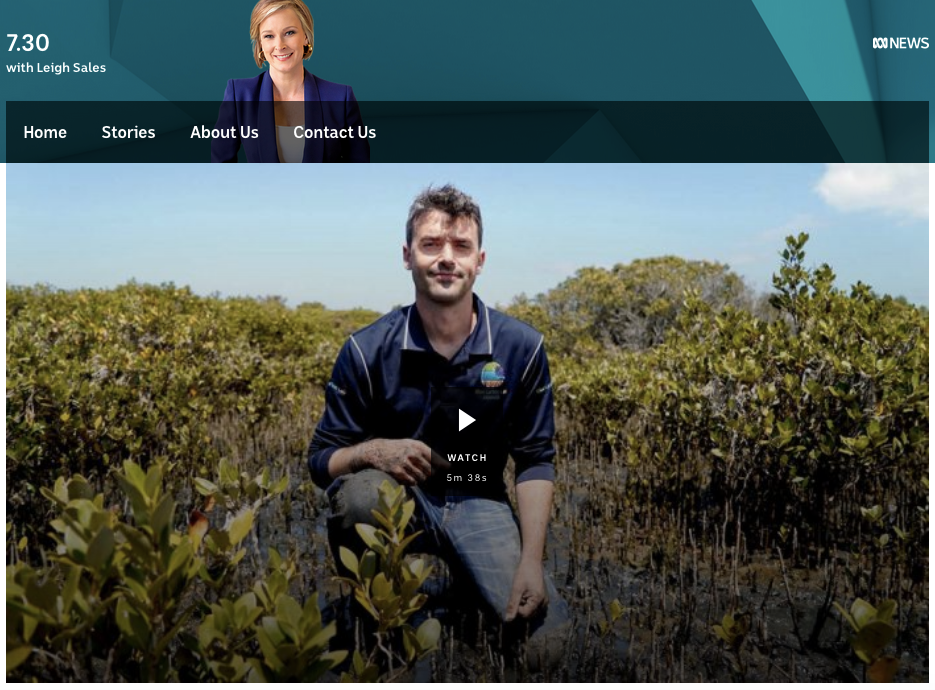 Blue carbon reserves are said to capture carbon 40 times faster than rainforests and store it for millions of years, rather than simply for the lifespan of trees.

“They might be small in area but they’re really packing a big punch when it comes to climate change,” Dr Macreadie said.

“We are losing these ecosystems at 1 to 3 % per year in Australia, and that’s equivalent to an extra 10 million cars on the road in terms of emitted carbon when we degrade them, so they’re really important.”

Professor Catherine Lovelock from the University of Queensland agreed blue carbon reserves are an important piece in the climate change puzzle.

“We’re a coastal nation, we have lots and lots of people live on the coast, we’ve got huge industries associated with the coastal zone.

“Restoring blue carbon habitats is so important for restoring fisheries, for restoring water quality for the Great Barrier Reef and coastal protection.”

Professor Lovelock has collaborated with Dr Macreadie in the past and said he is a great advocate for blue carbon environments.

“I mean he does drive you nuts because he is so enthusiastic, but I think that’s also part of the package.

“He’s been really influential talking to some of the big corporates in Australia and beyond.”

Getting industry players to care will be crucial in Dr Macreadie’s next mission — making blue carbon a part of carbon credit schemes, therefore allowing people to offset emissions by restoring wetlands.

Dr Macreadie said the first step was convincing the public to share his passion for mud and mangroves.

“It’s all about people power here,” he said.

“If we believe the oceans are important and want to protect and conserve and preserve them, then our politicians will respond to that and we’ll see more change happen.”